A Look at ‘Human Condition’ by Eric Cox
by
Wolfgang Nibori
“Humans are amphibians– half spirit and half animal. As spirits they
belong to the eternal world, but as animals they inhabit time. This means
that while their spirit can be directed to an eternal object, their bodies,
passions, and imaginations are in continual change, for as to be in time
means to change. Their nearest approach to constancy, therefore, is
undulation– the repeated return to a level from which they repeatedly fall
back, a series of troughs and peaks.”

– CS Lewis in ‘The Screwtape Letters’

One of the undying themes in art, perhaps the only real theme of art, is
the examination of what is called the human condition. This is the title of
the latest series of paintings from Phoenix-based artist Eric Cox who has
raised his vision to the highest possible aim an artist can have, to
express that which this series is titled after, while simultaneously
holding a focus on the what many would say are the lowest passions of our
species: sex and death. It is this balancing act that Cox performs in each
painting which makes it crackle with visual energy while still ‘freeze
framing’ several moments and layering them atop each other. The paintings
which make up ‘HUman Condition’ are never a single image any more than they
are made from a single medium – Cox employs wax pencils, spray paint, oil
paint and more in his attempt to slather on more pathos per square inch
than many painters manage to fit within a single canvas.

‘Candy Coat’ is the flagship work of this series and it is as soothing to
look at as it is challenging to understand. It depicts a woman posing, her
face obscured in darkness and emblazoned with a red circle, nude and more
than merely provocative. I don’t think it takes the mind of a sexual
deviant for a viewer to end up staring directly at her glistening,
bubblegum-pink vaginal lips. That is, if they don’t focus on breasts which
are surely the sought after ideal for most plastic surgeons. The painting
doesn’t stop there, though. Whether you imagine her standing or spread
eagle atop a bed, its not possible to make out how she relates to the space
surrounding her. It’s equally tough to decide why she has a face, turned
perpendicular to her body, embedded just below the left breast. This is
what makes Candy Coat so effective, though – it doesn’t give you an easy
outs, you’ve got to let it be what it is and it’s very likely that what you
think it is will change over time. To me, that’s the mark of an exceptional
painting, especially one relating to as shifting a concept as the human
condition.

Women feature prominently in Cox’s work, but when men appear – at least in
this series – they are often in their later years. ‘Stare Politely’
features one such world-worn fellow, balding with a substantial paunch and,
like many of the ladies, naked. Based on the title, it seems the viewer is
most likely to experience revulsion when viewing this piece, but is that
fair? It seems this is the question that Cox is asking in his roundabout
way because there is a definite evocation of pathos in this painting. The
man looks elderly enough that his clothes may not be the only thing he’s
lost and he seems confused, almost dumbfounded, but in mid-speech. This
quality of being frozen in the middle of an action (particularly talking)
is another trait shared by many of the works that comprise ‘Human
Condition’. It seems we’re always talking and almost as if Cox’s view of us
catches us jabbering, off guard and vulnerable.

As sleek and inviting as many of Cox’s female subjects are, others
emphasize our biological connection with our not so sexy sister species:
simians. Both ‘Ooh Ooh Eeh Eeh’ and ‘From That Day Forward (Early Self
Portrait)’ emphasize our connection to the animal kingdom. Most people
would agree that there are plenty of times when we do indeed exercise the
‘animal side’ inhabiting our times, as CS Lewis observed. It is this
shifting rhythm of bestial drives, drifting dreams and conflicting views
that both harmonize and fight each other in the paintings of Cox’s ‘Human
Condition’. These works are fascinating due to this conflict and the
ability of the observer to see what they want to see without escaping what
Cox himself sees. Only the best works of art really leave enough space for
a viewer to fit in their own thoughts alongside the artist’s – it tends to
be one or the other. Cox seems to instinctively grasp that our kind, from
the individual to the civilizations as a whole, forever perform a dance on
the edge of a knife’s blade trying just as hard not to get cut as to keep
from fall off into whatever oblivion awaits us.

Being a human is as strange today as it was for CS Lewis and surely
countless others before him. What Eric Cox shows us in his work is that
painting today can pack in more information than ever before and that
‘state of the art technology’ isn’t needed to do this. All one needs to
convey a genuine and honest sense of what it is like to be alive in 2012 is
a properly conditioned human – the tools really don’t matter. 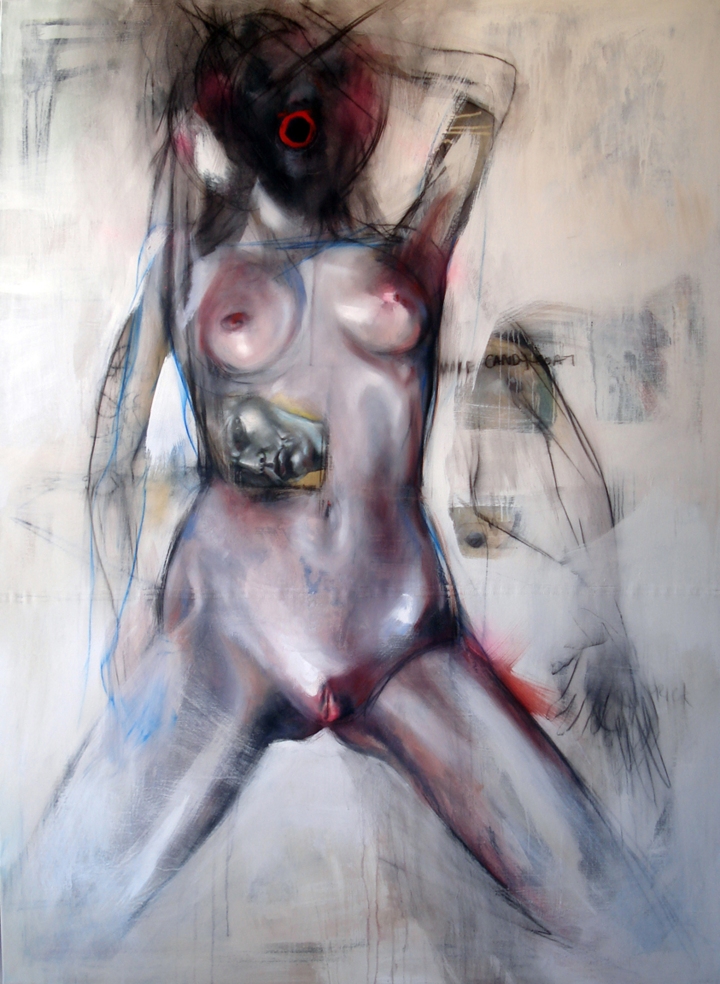